Applied to the whole of the UK by the Counter-Terrorism Act 2008, the offence of eliciting ‘terrorist information’ about security forces and the equally controversial (but not yet in force) power to seize anything for examination were previously restricted to Northern Ireland, where they expired on 31st August last year – see Terrorism Act 2000 Sections 88 & 103 for the predecessors of Sections 1 and 58A, respectively.

They’d already been through various revisions before that, with the power to examine documents first appeared as Section 22 of Northern Ireland (Emergency Provisions) Act 1991, a relative newcomer compared to the elicit offence, which is rooted in Regulation 10 of the Civil Authorities (Special Powers) Act (Northern Ireland) 1922:

No person shall, without lawful authority, collect, record, publish or communicate, or attempt to elicit, any information with respect to the movement, numbers, description, condition, or disposition of any police force, or with respect to the plans or conduct, or supposed plans or conduct, of any operations by any such force, or any information of such a nature as is calculated to be or might be directly or indirectly useful to persons hostile or opposed to the preservation of the peace or maintenance of order, and if any person contravenes the provisions of this regulation, or without lawful authority or excuse has in his possession any document containing any such information as aforesaid, he shall be guilty of an offence against these regulations.

Still, nothing to hide, nothing to fear, it’s not like any police officer would ever just make up a reason to seize ‘evidence’, would they?

And perhaps the Met were on to something with those posters after all, some photographers do seem odd: 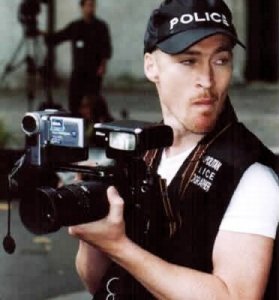 Best keep an eye on those ones. There is a war on, you know!

Lot of concerns how this amendment to the Counter-Terrorism Act 2008 that came into force Monday will affect photographers in general, and fitwatchers specifically.

Almost certainly at some stage it will do cos the cops have this devious little habit of misusing “Anti-Terrorism” legislation against legitimate protesters, activists and the like.

As my own contribution to all the voices raised in opposition I felt the need, like a lot of other photographers, to post something about it on Monday.
But I inadvertently ended up using a slightly different approach and tried to see it in the context of a broader take on things.

Called the piece “Britain 2009” and for anyone that’s interested its currently at www.tiltingatwindmills.org.uk

“Ask the ordinary “man in the street” what role he believes the police play in society and likely as not he’ll answer something along the lines of “maintaining law and order”.

Well, obviously we don’t move from being a relatively free and unrestricted society into a regime of repressive controls overnight. Its a process of transition, and a gradual one at that.
So where would we be likely to observe this process occurring first? Most likely over the “freedom to express or communicate political or other views”.
Why? Because it seems to me that would be the most obvious and necessary first step in the development of a politically repressive regime.”

Be warned though, its a bit long!

Well, we just couldn’t let today finish without introducing you to another of these lovely officers. 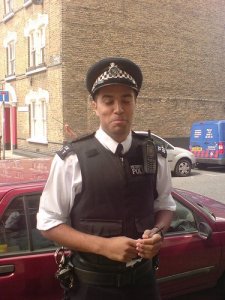 To mark the enactment of the amendment to Section 58 of the Terrorist Act 2000 making it an offence, punishable by up to ten years imprisonment, to publish or elicit information about police officers, Fitwatch have produced a new spotter card.

The above people are dangerous troublemakers. They are extremists who will stop at nothing to stifle protest and dissent in this country. If you see these people take appropriate cautionary measures, such as masking up, and take action to stop them repressing your right to protest.

If you have any information on any of the above suspects (or any other extremists we might be interested in monitoring), please email defycops@yahoo.co.uk 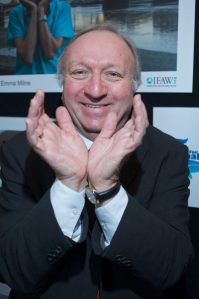 An MP has accused Sussex Police of deliberately intimidating patrons of a social club. In a surprise intervention David Lepper, Labour MP for Brighton Pavilion, said the police’s decision to photograph people entering and exiting the Cowley Club in London Road for a meeting about the environment last week appeared designed to scare activists rather than prevent crime.

“It looks more like an attempt to intimidate people going in and out of the Cowley Club rather than genuine surveillance. To have such a large number of uniformed officers with a camera with a telephoto lens seems like it’s meant to deter people from going in there. I accept that police need to gather information but this is a ham-fisted way of doing it.”

And again with Neal ‘Weasel’ Williams, but who’s that sourpuss in the middle?

A closer look, again with Neal:

And again with XB92 Guy Rooney: 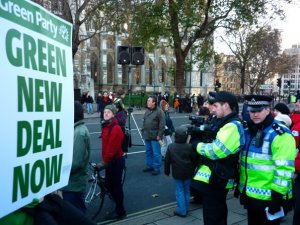 Here at Fitwatch, we always like to be able to put a name to a face, so it is with great pleasure we welcome SX32 Sergeant David Casson to the blog.

Unfortunately, as can be seen from these pictures, he is a bit camera shy. We therefore challenge any amateur photographers (or professional ones), to get as many pictures as possible of our new friend, and send them to us – defycops@yahoo.co.uk

Fitwatch urge all supporters to mark the coming into force of the Counter Terrorism Act 2008, by joining the NUJ and others at New Scotland Yard this coming Monday.

For those who may have missed all the fuss, this Act will make it a criminal offence to ‘elicit’ or publish information about police officers that is ‘of a type’ that can be used by terrorists. Already the police are gearing up for this, and are practising statements like ‘you can’t take pictures of us!’

See below for further ideas to thwart the Act…

Following the call-out for direct action against the new Counter-Terrorism Act (see below), Fitwatch is delighted to announce the Policewatch competition, for the finest pictures of the British police.

An amazing prize of the sensational boardgame “War on Terror” http://waronterrortheboardgame.com/ will be awarded for each of three different categories:

Scary – for the most shocking bit of police abuse recorded. Dixon of Dock Green it ain’t!
Funny – for the most hilarious classic copper moment. “Now move along, you’ve had your fun….”
Effective – for the pictures which proved a case against the police or had most success in defending civil liberties (please tell us what it did).- yes, sometimes we can actually say to coppers “you’re nicked”!

You can enter still images or video footage. Just post them on flickr (preferred for stills), blip.tv (preferred for video), youtube or anywhere else (please put the tags “visionontv” and “fitwatch”) – then send us a link.

We welcome images from anywhere in the world, but only the best of the British constabulary can win a prize.

Vision on recommend giving your pictures a creative commons license http://creativecommons.org/about/licenses/ so they can be distibuted as widely as possible.
The creative commons license they advise choosing is “Non-Commercial Share Alike” – which allows people to use your footage for anything non-commercial, and as long as they release it under the same license.

All videos and stills will be shown on visionOntv’s Policewatch series http://visionon.tv , hosted by Nick Ross (we made that last bit up – well, we could always ask him…). Stills may be edited into animated packages for television viewers.

Please email info@visionontv.net for further info on the Policewatch series.

When we first discussed the idea of Fitwatch, I didn’t think we’d receive the support or achieve the successes we have. For so many years, FIT had acted with impunity. They had become cocky, complacent, contemptuous of the law. However, whilst their contempt for the law sill remains, they are far from cocky.

A friend of mine wrote to me recently, telling me how much better things were for them now as the FIT were too busy “being harassed to bother harassing” them, and how “it should be acknowledged about how much better it is now than it was two years ago before anyone started challenging them.”

This is important, because during this rightly focused campaign on the photographers and their databases,it is easy to forget how bad things had become. We were passive to their presence outside all our meetings – our resistance to this intrusion amounting only to occasionally giving them the finger and masking up. On demonstrations, they had the impunity to follow us into large crowds., their photographers freely flashing. I remember one anti war march where they followed me so aggressively, my friend had difficulty walking with me. I’d like to see them try that now…

Possibly , the mistake the FIT made was to become complacent. Their rush to include everyone – from grannies outside arms factories to journalists- in their wide angled lens of extremism, has ultimately led to this backlash against them.

There are several events coming up over the next few months – from SHAC City Shakedown on 27th February, to G20 protests, and Brighton Mayday. Act in solidarity with Ftiwatchers everywhere, and let’s put the final nail in the coffin of harassment policing.