A very camera shy member of the FIT

One of our favourites, surely.

FIT Watch was set up a couple of months ago to oppose and monitor the activities of the Forward Intelligence Teams. These are cops who routinely harass and intimidate protesters (for full background see www.fitwatch.blogspot.com). Whilst we’ve had a presence at a couple of public meetings, Climate Camp has been our first opportunity to practice our tactics in a protest situation.

And it’s been working. FIT are being made to feel uncomfortable. They’ve been forced into a reactive situation and it is empowering because we have seized the initiative.

FIT Watch can be done by anyone and can be as passive or as confrontational as you wish. Here are some tactics we have found to be effective:

CAUTIONARY NOTE: ANY ACTION INVOLVING THIS LEVEL OF PROXIMITY TO FIT TEAMS MEANS THEY WILL TRY AND ENGAGE YOU IN CONVERSATION. DO NOT ANSWER THEIR QUESTIONS.

Two people have been arrested for Obstructing the police in the course of their duty this week. They were both charged and pleaded not guilty. Any witnesses should contact defycops@yahoo.co.uk


There have been many rumours as to why the FIT teams made their incursions into camp on Tuesday night. Some people say it was a response to being pissed off with FIT Watch, others that it was a test to see how we would react. Another theory is they were trying to kick something off as shown by the presence off vans of TSG and ambulances.

However they weren’t expecting the strong response from the camp and violently pushed, kicked and hit people. A combination of strength of numbers and people willing to push them back forced them off site and people felt empowered by this victory. However it was not the non violent victory reported in many places. People rightly acted in self defence and we would not have got them off site if we had simply walked towards them with our hands in the air as has been described in some places. Some people did raise their hands, but this was only after the cops had backed off the site.

FIT Watch is working, but we need more people. The next big event is DSEi and it’d be great if people carry on the FIT Watch tactics. 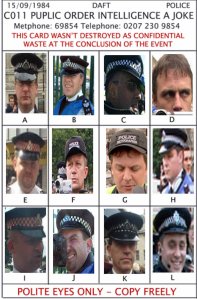 A FIT was out on Saturday morning, protecting the climate change criminals by filming those going to the meeting.

FIT travelled all the way from London to attend a demo that was called by the Disarm DSEi Nottingham Group. The demo was targeting gun manufacturer Heckler & Koch, whose UK office is on a Nottingham industrial estate (see IndyMedia.)

Highly visible in their blue-topped jackets were CO996 Sgt Sulley – one of the first ever FIT officers – and his friend with the giant camera officer 1818 (see pictures). Cars leaving the demo were photographed and followed by the police. One protestor on a motorbike was pulled over on the pretext of looking “too young” and “suspicious”, asked to confirm that he had been at the demo and made to show his driving license, presumably so that his details could be added to a database of dissenters

This is a thread to start compiling names and numbers and information about cops. Some of these pictures and numbers are quite old, so it would be good to have some up to date ones. Either add to comments or email to defycops(at)yahoo.co.uk 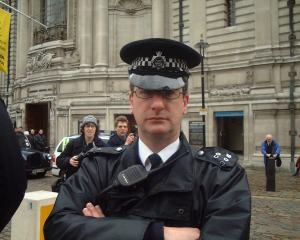 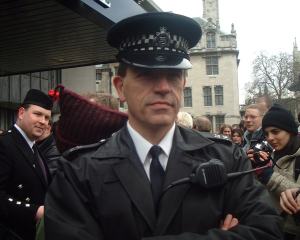 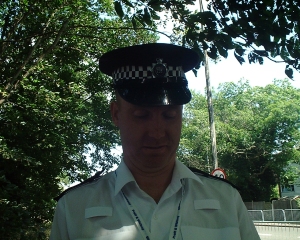 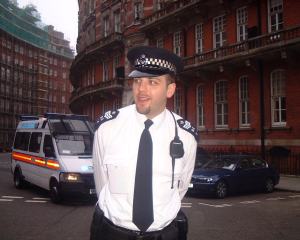 This meeting was called to discuss plans for disrupting the world’s largest arms fair, DSEi (Defence Systems and Equipment International) which takes place on 11th – 14th September 2007 at the ExCeL Centre in East London.

The meeting was also used as the first public call to resist the Forward Intelligence Teams (the cops who stand outside meetings taking photos and making notes about those in attendance).

Around ten people attended the protest outside the meeting with two large banners and a couple of small ones. One was particularly effective as it was on poles which meant it could directly obstruct the photographer’s view. Our aim was to prevent them from taking photographs of those entering the meeting and we were largely successful both because their attention was mostly directed at us and because the banners were large enough to block their view.

No arrests were made and people were able to attend the meeting without having their photographs taken.

The ethos under which this blog was set up was to resist the FIT teams by whatever means people feel are necessary. These could be very non violent and legal or very militant and illegal.

Whilst this obviously leads to a discussion of tactics, and for some this may be useful, it may be good to keep this blog dedicated to information, experiences and ideas for action without getting bogged down in a theoretical debate.

However I realise there are people who want to have this discussion so have set up another blog http://www.violencedebate.blogspot.com.

This is only a suggestion – this blog is an open space. But if people think it’d be helpful to continue the theoretical debate in another space, then the option is there.

A call for solidarity outside the next DISARM DSEi public meeting and every time there is a Forward Intelligence Team presence at a meeting or on a protest.

At the last DISARM DSEi public meeting, as with every other public meeting called by the group since 2002, there were police in attendance from the Metropolitan Police Service’s Forward Intelligence Teams (FIT).

For anyone who doesn’t know, these are the cops who are paid to harass anarchists (and the Far Right, football fans and Islamic fundamentalists). They follow “known” people on protests and they stand outside public meetings taking photos and writing copious notes.

The personal is political. Over the last six years I have been harassed, wrongfully arrested, assaulted and driven to a nervous breakdown as a direct result of the treatment I have received from the FIT teams. I know people who will not attend meetings or protests because they can’t deal with the FIT teams. I do not want to watch another person being driven to the edge by their actions. I do not want to hear of one other person being discouraged from joining our actions because of their behaviour.

Once and for all we need to admit they are a problem. We’ve spent too long ignoring them, pretending they don’t have an impact on us because of a belief that once they know they’re having an effect, they will become more powerful. However they know they’re having an effect and this is why they’re persisting. They get away with what they do because we let them. And whilst we continue to ignore their presence, we will never tackle the problem.

I feel a lot stronger since I have admitted this vulnerability and I now feel a pressing desire to reclaim their power. We have seen their behaviour fuck up our friends. We have seen the very real impact their presence has had on our movement. Isn’t it time we attacked this disease,this cancer which has afflicted us for years?

If we were being systematically tortured by the State, we would protest. Mental abuse is just as important and it is vital to the strength of our actions that we challenge this. This call to action and discourse is an attempt to kick start that challenge.

Over the last seven years, everyone who has attended a public (state perceived) anarchist meeting in London will have had their details recorded. This has both enabled the police to build up profiles of us over the years and has also made many newcomers feel uncomfortable about joining our meetings. Many people carry on walking when they see thecops.

It is argued that our meetings are already infiltrated and it is therefore a distraction to focus on the police outside. However the psychological effect of having them outside our meetings is damaging; damaging to both the experienced activists who feel harassment at their presence and to the people who do not even step inside the meeting because they don’t want their photograph taken.

The cops are so comfortable outside our meetings they think they don’t need back up. Four cops and a photographer feel safe outside our meetings. We have become too accepting of our own repression and this must change. We hold large demonstrations on behalf of others, on behalf of comrades in foreign jails. We must extend this solidarity to ourselves. We need to start dismantling the chains of our own oppression.

At the last Disarm DSEi public meeting, two people were arrested after trying to hold up placards whilst the cops were filming. Many people attending the meeting were inspired by the action and many commented they were happy to have been able to attend without having their photographs taken.

This proposal calls for solidarity demos outside every public meeting where there is likely to be a FIT presence. Every time the FIT team harass us, we must react. We must show them we will no longer tolerate this treatment. We must rebuild solidarity amongst groups. We may not want to get involved in the organising of every campaign, but we can spare half an hour to stand outside a meeting in solidarity with those in attendance. If we can spread this level of solidarity throughout the different groupscurrently experiencing harassment from FIT teams, then we are in a place to build a stronger, more effective, community.

Having a few persistent people with banners is a good start. However we should be aiming to get to the stage where it is prohibitively expensive for them to police our public meetings. We need to get to the stage that when they try to follow us through our demonstrations, people automatically link arms and prevent them from doing so. We are safer to the State if we stay as disparate groups. We are at our most powerful when we work in solidarity with each other.

This proposal can only start to work if we act in solidarity with each other. What are you going to do?

Further Action:This proposal is only meant to be a starting point. If there are enough people interested, it’d be good to have a cross group meeting to discuss strategies et cetera. This proposal is a personal response, it’d be good if different groups wanted to come together and write a joint proposal. For further information, networking, ideas etc email defycops@yahoo.co.uk

Join the email list by sending a blank email to fitwatch-subscribe@lists.riseup.net

A blog has been set up with the aim of becoming a resource for peopletrying to resist the FIT teams. People are invited to add theirexperiences, ideas, photographs, information – http://www.fitwatch.blogspot.com. Anyone can add comments to the blog, but anyone can be added as an author who wishes to contribute regularly.